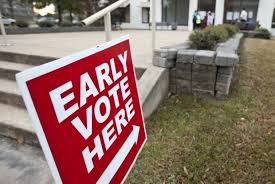 Here are the early voting totals to date and it’s official…. WE BROKE OUR OWN EARLY VOTING RECORD….

The 2016 to-date total of 4895 has already broke the 2012 total number of 4752 early voters and we still have two days of early voting left. To add to those already high totals, we also have maintained pace at 30% ahead of 2012 numbers, and as of yesterday, over 33% of all the eligible voters in Milam County have already voted.

Someone made the point to me that some of those voters might be voting for the other side and there is truth in that; however, with the rather lethargic voting turnouts we’ve had the last few years, I am excited to see us moving in the right direction.

Keep up the awesome work!!

Two more days of Early Voting left, so get out there a vote.

As a note, the polls will close early on Friday to allow everyone the opportunity to attend services for Porter Young. Our condolences go out to his family and many friends.

Posted by Bill Whitmire at 1:02 PM No comments:

After the Tuesday’s Early Voting polls closed, we are closer to going over the 2012 mark but still a bit shy; however, what a huge leap in voter turnout we are having overall this year. I got a call today from on the folks at the state party and they have taken notice of the vote here in Milam County. They are very impressed at our voter turnout considering there are no contested races on the local slate.

I told them, “that’s because Milam County Voters pay attention to what’s going.”

Pretty good stuff folks. Well over a thousand more have voted in this year’s election than at the same time in 2012. Hopefully that holds steady.

I have received some more calls about faulty voting machines and such. Let me say once again that we have not had any erroneous votes, nor have we had any machines changing votes. I would offer that we all should check our ballots before we press the “Cast Ballot” button. As always, if you are not sure about something please ask one of the election officials to help you out, they are there to help you.

We have had some reports of voters coming to the polls with less that helpful attitudes and I would just ask each of us to take the time and give the election workers a chance. They are all hard-working folks who are out here to help us vote, not take any abuse.

Thanks Again,
Bill
Posted by Bill Whitmire at 1:40 PM No comments:

For a while it was a chore to get some Trump/Pence signs but we finally did. As a matter of fact, in past years we have only ordered about 200 yard signs for the presidential race and usually had some left over. This year we have had to order them twice and are still running low.

Part of the reason is the demand, but part of it is the blatant vandalism by those who do not agree with the Trump candidacy.

Now as many have been keen to go after the Dems for this sort of shenaniganry, I will not do as my local county Dem counter-part habitually does and resort to some namby-pamby name-calling rant about how the other party is the most terrible thing incarnate of the world.

I’ll just tell you this is the worst year on record for GOP signs to be vandalized in all sort of manner. I’ve seen people paint on the signs as shown above. But this year they have resorted to drawing some items that would be more appropriate for a sign belonging to a Democrat like Anthony Wiener.

Heck, some of these hooligans had the time to steal a Trump sign, cut it into the shape of Anthony Wiener’s favorite body part, and then put it back where they got it.

Honestly, if it wasn’t so vulgar, the cutting on the signs might be worth leaving since the cutting draws added attention to the signs – But we are better than that.

But we are better than that……AND, even if someone wanted to vandalize a Dem sign…...GOOD LUCK FINDING ONE!!!

Anyway, it’s been a tough year on signage…. Unless you’re a sign maker.

Posted by Bill Whitmire at 12:28 PM No comments: 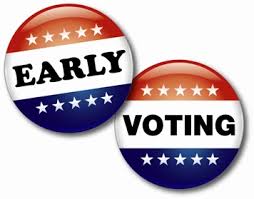 Currently, nearly 29% of Milam County Voters have already voted in this year’s election. AND we are still above the 2012 totals by over 30% and on pace to easily break the 5,000-voter mark during Early Voting.

When I go to state function and meetings, one of the primary qualifications for a county in how the state and federal folks look at us is how many of us vote. The higher the voting percentage in a county the more interest those in office take in us.

In an election like this year’s election, this is where we make our mark. Are we always looked at as a small county, or as a county where an overwhelming majority of our population get out and vote to make a difference? This is the most important election in the history of our country and it’s up to us all to get out and vote to make that difference.

Early Voting is open until Friday, November 4th. Election Day will be Tuesday, November 8th throughout Milam County. I will list the polling places in the next few days, but remember, you can vote in any of the Milam County Locations…so go out and Vote!!!


Bill
Posted by Bill Whitmire at 10:27 AM No comments: