This last weekend I joined the rest of the delegates from Milam County in attending the 2014 Republican Party of Texas (RPT) Convention in Fort Worth. There was much to be excited about and much to discuss, but nothing has drawn as much ire as the debate of and the language included in the RPT Platform.

Initially there was the debate over two Minority Reports pertaining to the use of medical cannabis. First, the addition of a statement that would allow medical cannabis’s use was not approved. Then after another hour of debate, the already included statement to allow for the study of the use of Medical Cannabis was stricken. The stricken statement probably would have been okay except for the fact that it called not only for the state to allow the testing to be done, but also to facilitate (i.e. fund) the study. That is where many folks had an issue with it.

Then the final Minority report which covered the Immigration plank and included several triggers as to what must happen first in the immigration issue such as securing the border and effective E-Verify System to be put into effect. Later in the day the immigration issue again was brought up and carried quite a bit of the discussion on specifics that are too intricate to get into in a one page blog post. Safe to say, immigration was widely discussed.

Now the Platform Committee held hearings and meetings all week and brought forth a fairly well laid out 40 page document. As a general rule the platform is a document that provides a generalized basis for the party to use to define their basic beliefs. It is doubtful that anyone will agree with the entire document. Hopefully most everyone agrees with at least 80% of it. As President Reagan was apt to say, we must fight for the 80% we agree on and not over the 20% we disagree on.

But with all the good that is in this document, the one item that the press has decided to focus on it the inclusion of a plank to ensure the availability of Reparative Therapy in regards to homosexuals. I have heard many complaints on this from solid GOPers who were not there, and of course our liberal brethren have run it up the flagpole as an opportunity to further scare the LGBT community.

So why is it in there? I wondered the same thing.

I questioned two committeemen and this is how it was explained to me. While there is much criticism and theories as to its usefulness, the Platform Committee felt it necessary to include after the 2013 law in which California made the offering of this therapy to teenagers illegal. This plank simply states that Reparative Therapy should be available to an individual who may want to take part in it. Essentially, as stated in the document, the platform looks to protect an individual’s rights to Reparative Therapy in that “No laws or executive orders shall be imposed to limit or restrict access to this type of therapy.”

Of course liberals and the media have taken this allowance and decided to falsely represent it saying the RPT believes that reparative therapy is the only way to handle or cure homosexuality. As is usual, the Democrats fail to use the truth or the spirit of the plank, they simply scream and shout about the racist, homophobes on the conservative side and hope that people are ignorant enough to not seek the truth. That is how they have ruled places like California and have almost completely run it into the ground.

The platform speaks out in typical Christian-Judeo fashion on Homosexuality and while there are still a solid block that hold this as their belief, there are many who see homosexuality in a different light and don’t agree with the platform; however, that is part of their 20% of the platform that they do not favor.

Once the new platform is up and online at the RPT website I suggest you all to take a look at it. Like myself, I doubt you will agree with all of it but like I tweeted as I left the convention, “Remember, the platform is a guideline for the party to use as a basis of beliefs, not a set of mandates to override common sense. #rptcon14”

I’ll talk later about how the convention works, it’s definitely interesting and everyone should go at least once.

First Night on the Convention Scene!!

Well Kyle and I got to the hotel around 7 and set out to check out the Stock Yards for a good steak dinner and to enjoy the avenue before the crowds arrive tomorrow night.

By the way…if you haven’t been down to the Stock Yards then you need to check it out. Excellent foor, great music, and lots of places to by some western gear.

Fixing to leave the hotel for the convention center and all the fun!!


Bill
Posted by Bill Whitmire at 4:43 AM No comments:

Email ThisBlogThis!Share to TwitterShare to FacebookShare to Pinterest
Labels: 2014 RPT Convention, Fort Worth

First night in town means a stop at the Fort Worth Stockyards for a little Meal!! 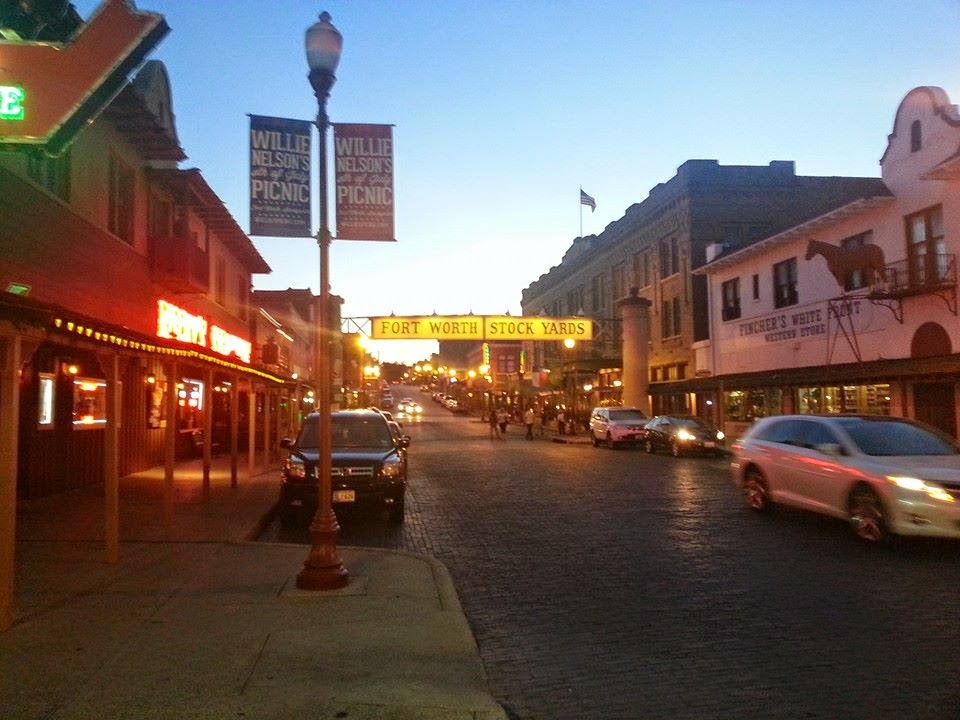 Posted by Bill Whitmire at 9:10 PM No comments: