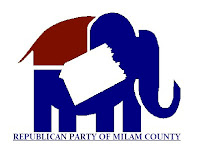 As a result of the substantial changes election calendar in 2012, the Milam Republican Party will not be conducting precinct conventions on the evening of the May 29th Primary Election and will be incorporating all party business into the county convention on April 14th.

All attendees will be seated by precinct and will vote their precinct strength. Furthermore, all attendees have the right to seek to become a state delegate and to bring forth resolutions for consideration by the convention. The convention will be open to any registered voter who signs an oath of affiliation identifying themselves as a Republican.

As an additional resource, the state party stands ready to answer any questions related to the 2012 Republican Party of Texas Convention process. More convention information is available at the RPT website - TexasGOP.org.

For any additional questions or information, please contact Milam County Chairman Bill Whitmire at 254-482-0354 or by email at: milamgop@yahoo.com. More information can also be found at the Milam GOP website at www.milamgop.org.
Posted by Bill Whitmire at 12:13 PM No comments: