Phew, is it October yet? 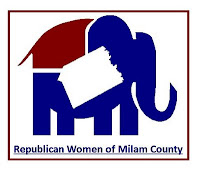 September always seems to start off kind of slow but then you realize there is so much going on and the next thing you know it has ripped by and you are full into October. Of course maybe it’s just me and time just keeps flying - Faster!!

This last Tuesday, September 6th, the Republican Women sponsored their fourth annual Old-Fashioned Rally in the Park. Of course this year it was held in the VFW hall and we had it a little later which did cut down on attendance a little but we still had a good time and got to meet with many of our state and federal elected officials including US Rep. John Carter, State Rep Charles Schwertner, the Justices of the Third Court of appeals and our representative to the State Board of Education Dr. Marsha Farney.

All that and free hotdogs and ice cream – Fantastic.

Anyway, September is a busy month for the Milam County GOP and I thought I would make a quick note and share some of them with you.

Monday, September 12th, there will be a meeting of the Milam County Tea Party. The meeting will start at 6:00 pm at the Budget Host inn and Suites in Cameron. Come on by and join in for some conservative talk and even some debate. These are good folks who are worried about the direction this country is headed and regardless of what our Democrat brethren preach, I think you’ll be quite excited to be a among this group.

Friday, September 16th, is Liberty Day. If you’re not familiar with this, it is a day the legislature set aside for Fifth Graders to learn about the constitution; however, there has never been any materials provided for this, so for the last few years and the conceivable future, the Republican Women of Milam County have furnished the school children and teachers of Milam County with these materials. Each Child will get book on the Constitution and the teachers get a lesson guide with which to lead their students.

Tuesday, September 20th, the Republican Women of Milam County will be holding their monthly meeting at the Budget Host Inn & Suites in Cameron with their featured guest State Rep. Charles Schwertner who will give a talk on the 2011 legislative session and then take your questions. Don’t miss this chance to speak one-on-one with your elected member of the State House.

Well that takes care of September. I will be back soon with more information but please take the time and come on out to these meetings and support the Republican Women of Milam County in their efforts to better Milam County.

Thanks,
Bill
Posted by Bill Whitmire at 1:22 PM No comments: